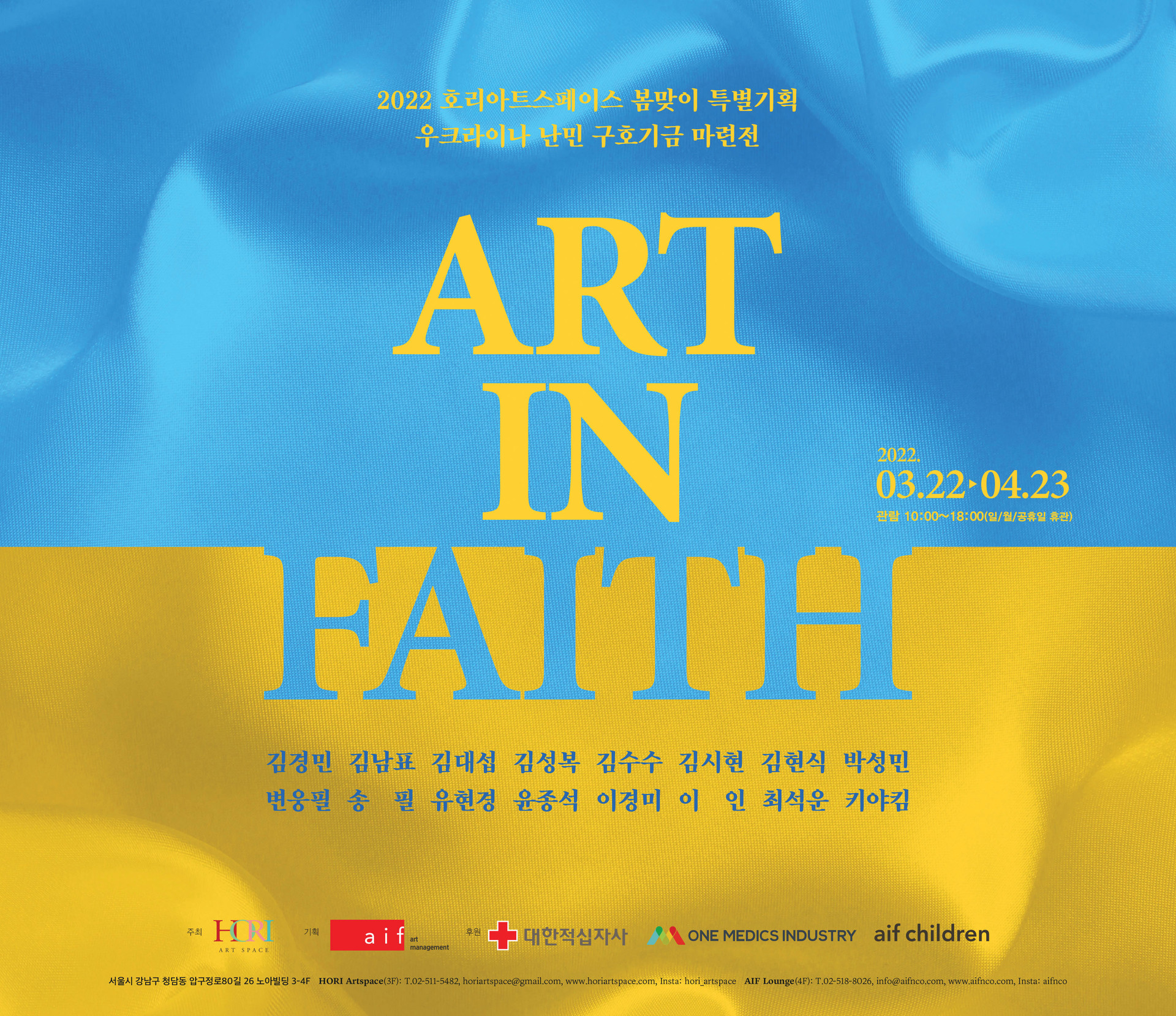 For the first invitational exhibition of the year 2022, HORI Artspace has selected film director Byung-hun Min – creator of <Pruning the Grapevine>, <Touch>, <Love Never Fails>, etc. - to have his first solo media art show. The title is ‘Eternity and a Day’, and in it, twenty video works with various facets of nature captured in Jeju Island are presented, from the emotional and meditative viewpoint.

The Breath of an Angel, Light as a Feather, Eternity and a Day, When even I can’t help myself, Volsurok, Shall Fade like Fog, The Sealed Time, The Sea and the Poison, Requiem… As these titles suggest, the works flaunt director Min’s talent in creating sentimental visual of his own, as he has been acclaimed as one of the leading art film directors of Korea.

The theme and title of the exhibition ‘Eternity and a Day’ consists of Min’s video works that are reinterpretations of nature as he went through the forest and the sea for years in Jeju Island. Just like the therapeutic feeling from gazing into the fire, the forest, or the sea, watching his videoclips arouse the soothing and relaxing sensation.

There were many eager hands to be of help to Director Byung-hun Min's first solo media art exhibition. At HORI Artspace (located on the 3rd floor of the exhibition building), thanks to LG Electronics’ sponsorship, the latest digital screen devices such as Ultra HD TV, Standby ME, Gram17 Laptop, CineBeam Projector are utilized to demonstrate how the video artworks can come to daily life, thus bringing more intimacy. On the other hand, the CRT monitors of analog days provided by Jung Eun Electronics – a company that has cooperated in preserving and restoring Nam June Paik’s video artworks – are installed at AIF Lounge (on the 4th floor), evoking nostalgia. In addition, 10 NFT works produced in the motif of the works at this exhibition will be released sequentially in time for the show’s opening, through NFT market MetaGalaxia(CEO Kwang-rim Ko).

There are private sensibilities of life in the works of <Eternity and a Day>; Especially captivating are the close-up shots of ordinary daily lives and the “time-based events” created in the process, for the appearance of the plain nature was staged in ‘slowed time’. Watching everyday moments captured by a high-speed camera and played at much deferred speed brings a strange comfort and even a mystical sense of relief. Moreover, you get a peaceful chance to observe what landscapes appear repeatedly or what changes occur in nature.

They may seem a bit dull at first glance, but what you will clearly come to discover is the vivid inner side of nature that has been overlooked. It is as if the artist's camera is answering the questions of what new realities can we discover when in the sea and forest with a terribly lonely gesture. In the end, Director Min's works are based on the objective record through a camera’s lens; the raw pieces of the 'compressed image' that transcend time and space displayed on the monitor.

Director Byung-hun Min’s one of the most remarkable achievements through this exhibition is that he vividly delivered the free and dynamic aspect of the altered film format while maintaining the solid appearance of a movie. From short films to feature movies, director Min has been receiving huge acclaim for producing “marvelous shots that cannot be easily explained with a single keyword” with brisk crossovers between genres, reality and fantasy. The audience is led to experience seeing the conventional order that had been taken for granted with a whole new perspective. Also, not only immersing in that artistic moment as the viewer comes to twist the order through Min’s works, but also, he/she receives a confirmation of having had a fixed view on the reality.

Director Min's media works in this exhibition are the result of his unceasing journey in Jeju, with a camera in his hand to record “the wind and memories of nature”. The free-spiritedness in the avant-garde film movement style makes them “experimental movies”, while being the exemplary case of transmitting personal ideologies into a movie format. Attempting unconventional variations and extensions of documentary grammar in his own way, Min’s works of this exhibition will serve as an opportunity to further expand the existing format of visual art. Above all, we expect that they will be remembered with fondness to have brought vitality and sentimental healing amidst these years of the pandemic period. 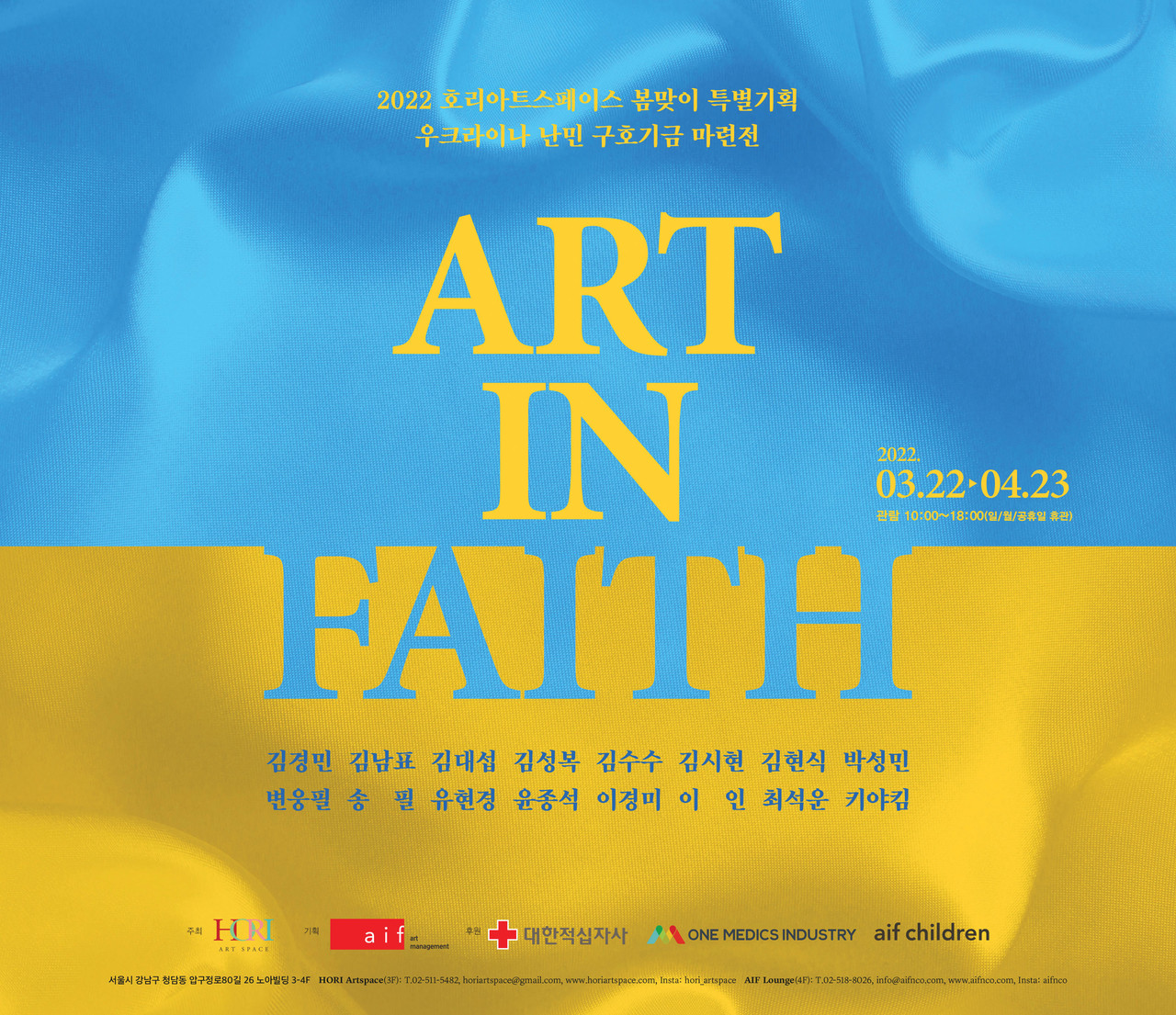 In greeting the spring of 2022, HORI Artspace (CEO Nari Kim) held a special exhibition under the title of <Art in Faith>. Many artists have gathered with a heavy heart concerning the Ukrainian refugees from Russia’s recent invasion of the country.

Yoon-sub Kim (CEO of AIF Art Management) who oversaw the event commented, “The true power of art shall spread its positive influence when the pain of the era can be shared in the contemporary sensibility. It is my hope that the passion of many artists that twinkle like fireflies will come together and accomplish the incandescence of a lighthouse.”

<Art in Faith> is joined by Korean Red Cross, for the gathered fund will be delivered to the Ukrainian Refugee Relief through the organization. Nari Kim, CEO of HORI Artspace who hosted the exhibition, expressed her wish that, “Through this exhibition, may the Ukrainian refugee children gain even just a small hope despite the suffering they are going through,” and also commented, “It was all the more meaningful that we could do this with Red Cross, which has always stayed neutral amid political, ideological, racial conflicts, and endeavored in relief activities.”

There was a running theme among these works that evoke hearty emotions, being in accordance with the purpose of the exhibition; Si-hyun Kim’s work in the motif of the colorful Korean traditional wrapping cloth, Suk-un Choi’s painting of a girl embracing a pet dog, Sung-min Park’s depiction of fresh fig fruit in pottery, Jong-seok Yoon’s painting of a goose with a peach on its head, Song Feel’s sculpture of plum blossom representing the new hope for spring, Dae-sub Kim’s painting of the desirable yellow quinces on a small traditional dining table, Lee In’s paintings of a flat rock against color stripes as if to describe a firm faith, etc. – all quite exceptional in their originality and uniqueness.

Dae-sub Kim, The ego and the non-ego

Lee In, Black, something

Kiya Kim, 1st Society Series_sometimes it can be myself_08

Kiya Kim, 1st Society Series_sometimes it can be myself_082019, Mixed media on readymade doll, 9x12x32cm